Aim: To begin to create a forager’s garden on a disused boule court in a public park

> enliven the site for the benefit of local people, visitors and nature

> create opportunities for people to reconnect, spend time together, learning and exploring

Frameworks & Design Process: As this is a land-based design I have chosen to begin here with the MSCADE framework.

In part, I’m getting my eye back in to formal designing after a bit of time has passed since my PDC. I’ll begin here where I left off, a chance to practice with this framework which I used for the PDC, as a means to springboard into new learning as I go along and increase and expand my knowledge of different frameworks. I’ll draw inspiration from Aranya’s ‘Permaculture Design, A Step by Step Guide’, Looby Macnamara’s ‘People and Permaculture’ and Delvin Solkinson’s ‘Design Notes’. This feels like the first write up. I’m starting here as I have much material collected from implementation on the ground. The garden will be situated in the Lower Boule Court area of The Kymin, a five acre steeply sloping woodland dell, which is public open space. 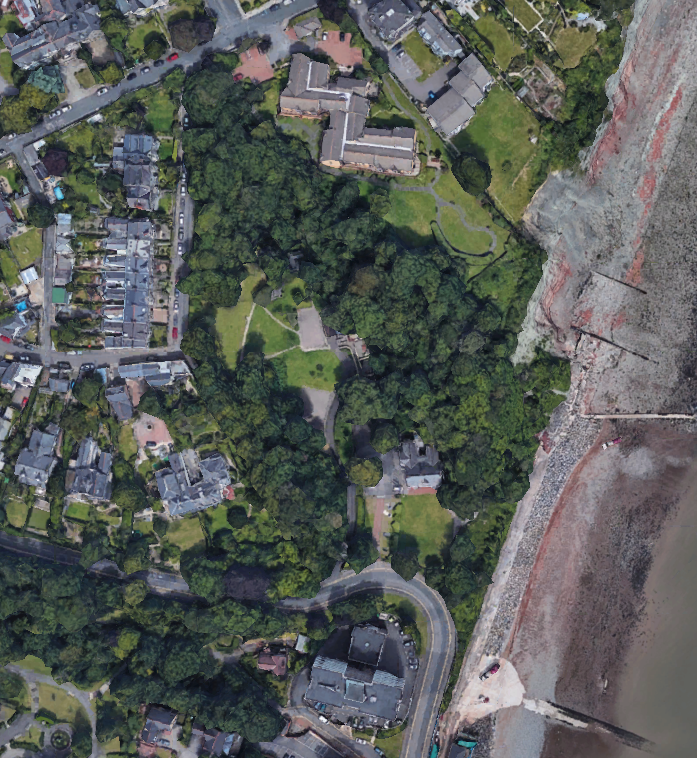 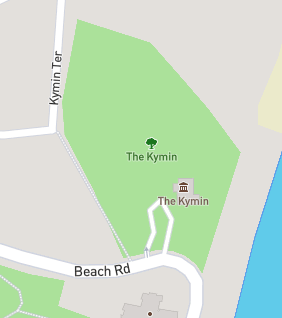 The Lower Boule Court area sits to the left of centre within the wider site. It is accessed up three small steps, is boundaried by a steep bank, trees, and metal railings to the lower end. The area has been unused for many years. Towards the back is a stone wall. The site is edged with a wooden border. It measures 12 m x 15m. The surface is fine gravel, on which weeds have grown. 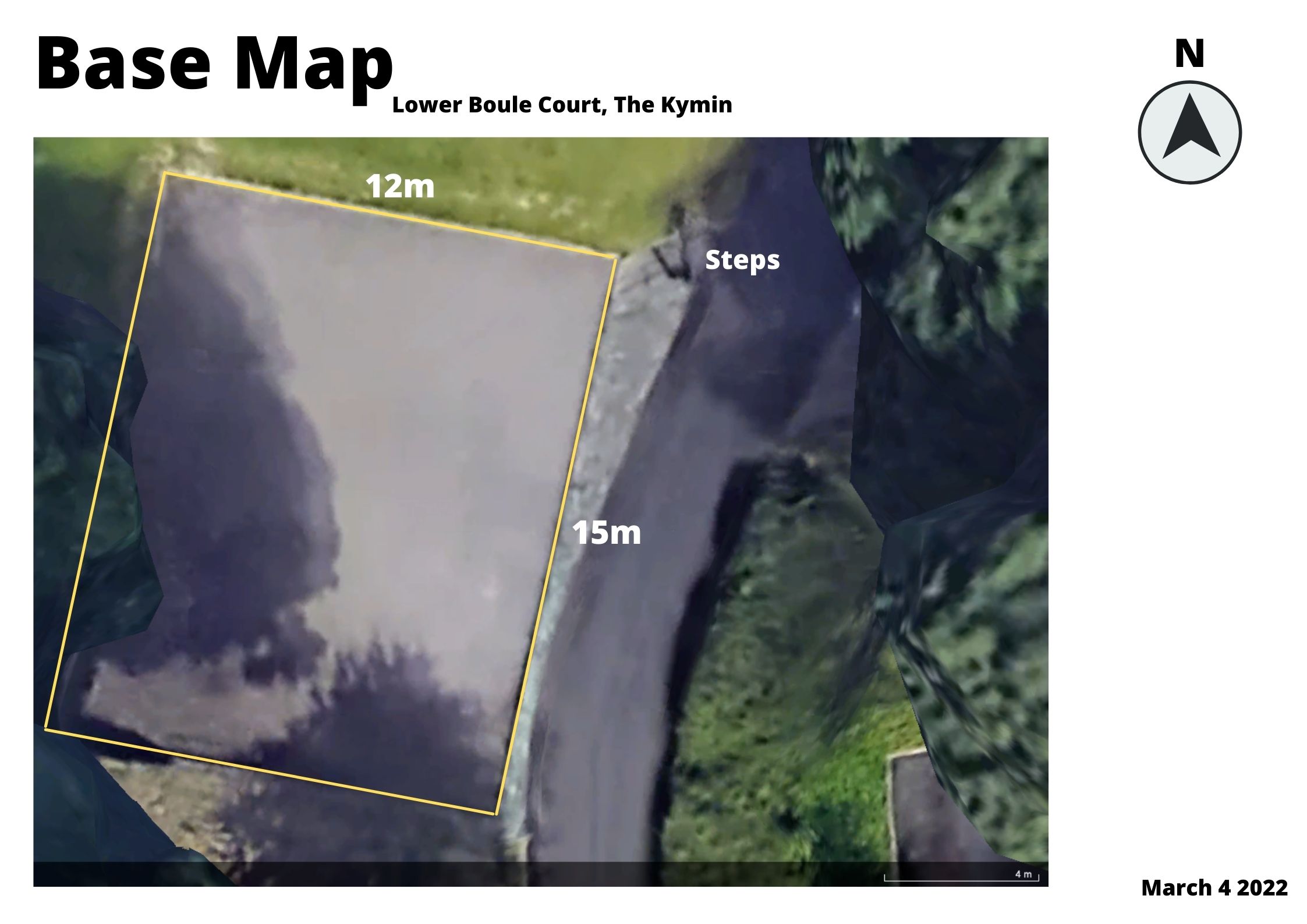 *TO DO – measure the scale from your printed map 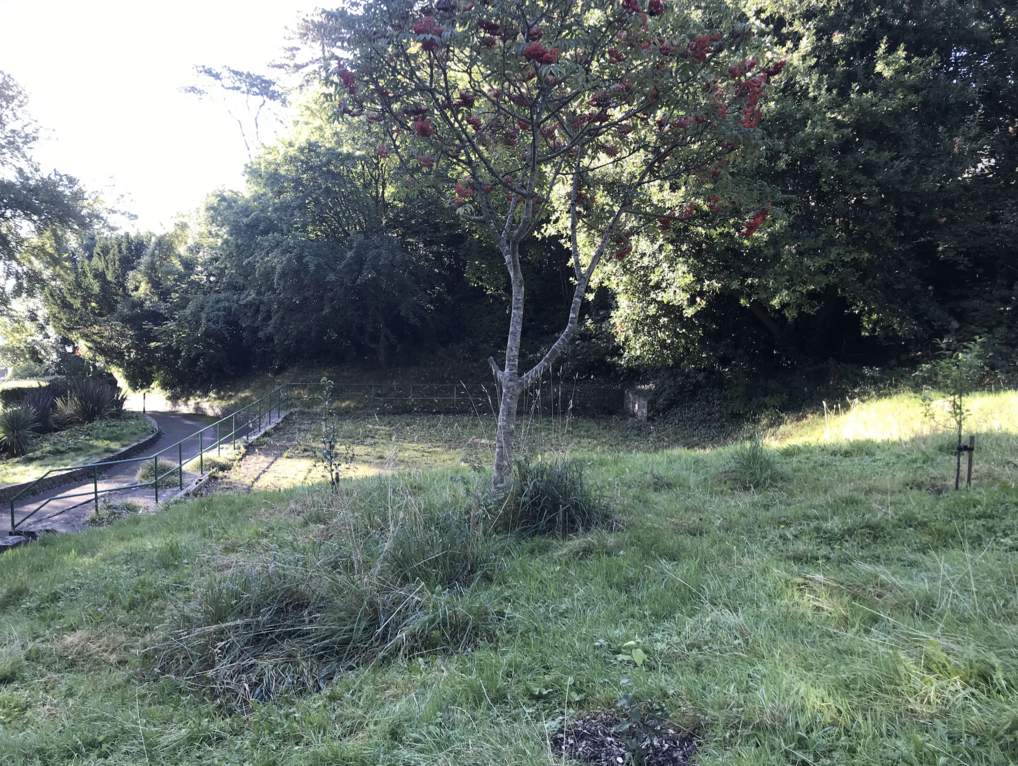 The original domestic house is thought to have been built built between 1790 and 1810. However, an article in the Penarth Chronicle in 1895 suggests that parts of the house date from 1500 to 1600.The house has been occupied over the years by a Major General, an Army Captain from Ireland, a magistrate and an architect / surveyor to the Plymouth estate. 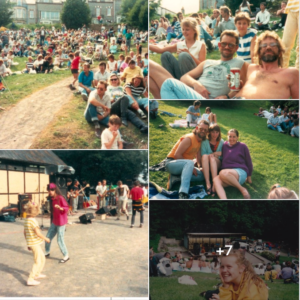 The Kymin has been used as a place for celebration and gathering. These images from circa 1986. The old coach house behind The Kymin. Only the foundations survive today as low walls with enclosed seating areas. Perhaps the terraces? As indicated by the branches of holm oak on the top right of the image. 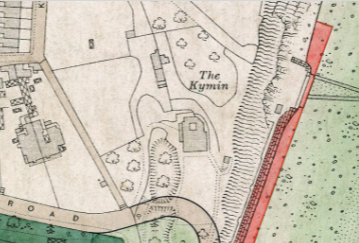 From 1920, you can see that the trees are absent on the left, remnants of the farm perhaps? Comment from local on Facebook “I also remember the great garden parties in the Kymin and the Punch and Judy Shows.”

Observations – weeds grow in number on the surface of the boule court, predominately  herb robert. As an indicator species this tell us that the area is shaded. often an indicator of ancient woodland.

Primary land use – in it’s history, the Kymin has been a farm, in recent history it has been used as a public amenity site. We might be wrong to keep calling it the lower boule court, this comment on Facebook tells a different story “Penarth Pétanque Club’s old pistes (the club was forced to relocate to Sully)”. The Kymin can perhaps be dated back to the 15th century.

It was a working farm for many generations.

​The present Kymin House was probably built in the 1790s as a seaside villa on the site of the previous farmhouse, and has been greatly modified over the years since.

varies in elevation from about 20 to 40 metres OD

Wind – comes from the sea up the dell

Observation –  We were at the site on the days of storm Eunice in February 2022, the lower boule court is an extremely sheltered area.  As we worked the air was calm, we’d have hardly known there was a storm, if it hadn’t have been for the weather reports and warnings. The statistics below indicate the prevailing wind over time to be form the South West. These south westerly prevailing winds are dispersed by the trees in the West Wood.

Elevation – this useful online tool plots the elevation at various locations on the site. The lower boule court is 37m above sea level. 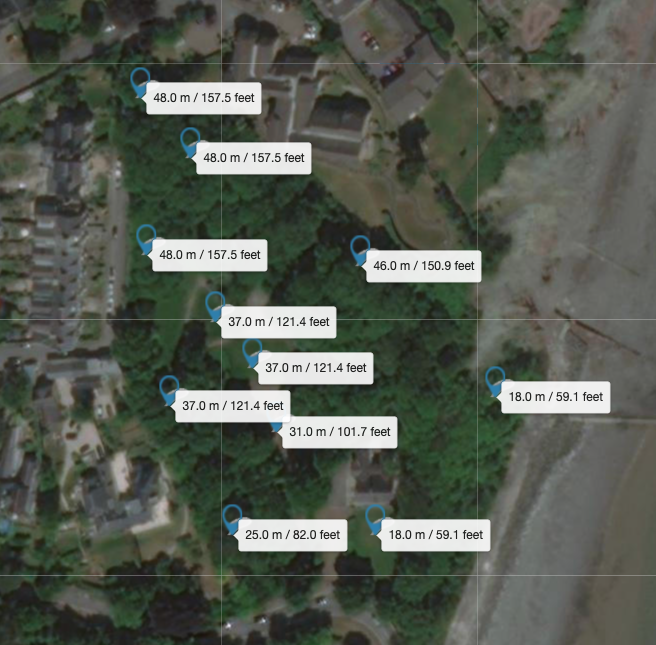 Our site is shady, there’s no getting away from that! The shade line diagonally across the site is clearly visible in this photo. The map from suncalc.org shows the path of the sun over the site. We dug a test pit to see what the site was made of. It’s a think layer of gravel, at about a foot depth you get to the rock which you can see visible on the beach. Water is available from two taps, one located on the main house, quite a walk away from the lower boule court, the other is located in the ladies loo. There is no rainwater available.

The steep slope of the sit may indicate water runs off from the top to the house. I haven’t observed any big water or storm events yet to have any knowledge of this. Apart from the day we moved soil inn the lashing rain. There doesn’t seem to be any indication of areas flooding or water pooling.

Stories of the Kymin tell of a stream running through it, but we haven’t been able to find any evidence of that yet either.

Our water management task as the design unfolds will involve a strategy for rainwater harvesting.

The lower boule court area sits low down, it is sheltered from wind by the steep bank up to the orchard and the trees to the south of the site. I’ll learn more about this as the summer progresses.

∙ Information about the land

notes from meeting with Elen and Richard

Gathering and evaluating all information.

How you apply the ethics and principles to the design.

Earth Care – land and nature stewardship, understanding our relationship to the land, public open space, history of uses of the site, valuing the under used site as a place to grow food and nurture wildlife, increasing biodiversity

People Care – working together, importance of community consultation and involvement

Making sure all have their needs met, listening

Managing working with an external organisation

Sharing – opening up as a place of learning, creating opportunities for local people to learn about wild food and food growing in a shady garden deepening our relationships with volunteers through time spent creating the garden, share of the crop for volunteers and local people Notes – conversation with Terry about compost – keeping everything close to hand, on the LBC itself might be a better place for the compost that out the back of the garage (keep that area for leafmold making)

Zones occur on three levels, whole site and for LBC design and On another level, the community garden is Zone 2 on my permaculture home design In October 2021 we applied for a garden pack, our application was successful. We began installing the food growing garden pack we got from the Keep Wales Tidy ‘Local Places for Nature’ scheme in February 2022. This included a greenhouse, a composter, three raised beds, wildflower turf and lots of plants. We had spare sleeper wood, so we made two large potting tables for workshops and feasting.

We delighted in the number of people who came to help. The install led to emergence of a WhatsApp group with 23 people joining in a matter of days. This process has been hugely engaging for all involved. We have had our ups and downs!

© 2022 Experiments in eco-living at home and in our community. Created for free using WordPress and Colibri